The Maldives Whale Shark Research Programme (MWSRP) is a research-based conservation charity dedicated to studying the whale shark and fostering community-focused conservation initiatives in the Maldives and the greater Indian Ocean.

Their goal is simple: to seek to advance the field of whale shark knowledge and to advocate for sound conservation policy in the Maldives. By encouraging and valuing community and industry stakeholder participation, they are able to leverage scientific research to safeguard the rich biodiversity and fragile marine ecosystems that are the basis for not only whale sharks, but also life, livelihood and culture in the Maldives.

We asked a recent volunteer, Kiersten, to share her experience of volunteering with MWSRP. 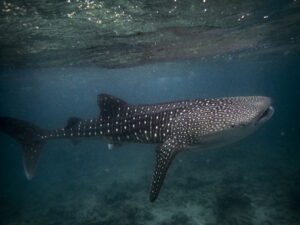 In mid-July I joined 6 other volunteers on board the MV Felicity where we had the incredible opportunity to spend two weeks studying the whale sharks residing in the South Ari Marine Protected Area (SAMPA). Each of us came from different parts of the world: a couple from Switzerland, a mom and daughter from Brazil, a woman from the UK, a man from the Maldives, and myself from the US. On board, we joined 8 crew members and our 3 hosts, Bas and Chloe from MWSRP and Kamey from MWSRP’s partner tour company, Secret Paradise.

The accommodation on the MV Felicity was exactly what we needed. Beach and bath towels were provided, along with hand soap and travel adapters. Each room had an ensuite bathroom and there was fresh water available to fill our water bottles. Be sure to pack your reusable water bottle! 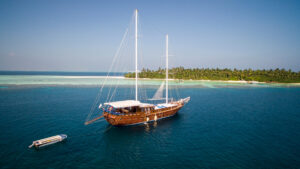 Every day was a little bit different, but a “typical” research day started with waking up between 7am and 8am, eating breakfast with the group, and then boarding the survey dhoni between 8am and 9am. Once everyone was on board the dhoni, we’d set off for the South Ari Marine Protected Area (SAMPA) to begin our survey. With whale sharks our main focus, most people took up their positions on the top deck to look for the speckled giants beneath the surface. We also kept an eye out for other mega fauna in the area, jotting down any dolphins, mobula rays and sea turtles that we spotted. Sunscreen and sunglasses are a must when on the top deck, with brimmed hats and rash guards as recommended bonus protections against the Maldivian sun. Boats in the area were also recorded recording data including the number of people on board and their behavior, such as if they were speeding on the reef, which can be dangerous and life-threatening to the creatures living below.

Lunch was served on the dhoni and we’d eat in shifts so a few people were always searching for the whale sharks. Watching the water was like a meditation, peaceful and quiet until suddenly you’d hear someone shouting “shark!” or “fehurihi!”, the Dhivehi word for whale shark. It was the moment we’d all been waiting for! Anyone on the top deck would rush down, everyone getting their gear on as quickly as possible before slipping into the water as quietly as possible. Sometimes the boat was able to stay with the shark, and other times we had to swim to catch up. 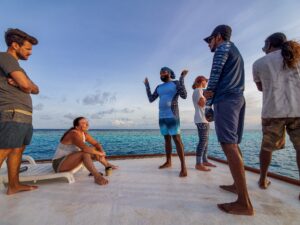 WHAT DATA IS RECORDED?

We’d take specific photos in order to ID the shark, capturing the left and right side between the fifth gill and their dorsal fin, along with with photos from above if they were deep enough for us to not impede their movement and from below to determine the sex of the shark. While in the water, we’d also try to estimate the length of the shark, photograph any injuries new or old, take note of their behavior and the behavior of people around them. There were some days our group was alone with the shark, which usually meant a longer encounter, and other days where the shark was surrounded by snorkelers and scuba divers, which meant a shorter encounter for us. Once back on board, we recorded environmental variable data, taking note of the wind direction and speed, the current, visibility, and water temperature.

Because whale sharks are wild animals, their behavior can be unpredictable and there were a couple of days we didn’t see any sharks on our survey. But there was never a day that we weren’t in the water. We always took some time to go snorkeling, where we’d see fresh reef growth, sharks, mobula rays, and sea turtles, along with a diverse array of fish.

In the late afternoon, we’d head back to Felicity where there’d be time to relax, nap, and play Rummikub before starting on data entry. Loosely split into teams, one group would input the vessels into one spreadsheet, another group took on the mega fauna entries, while a third group edited the ID photos and input them into I3S which the software used to identify individuals. The fourth group input the whale shark’s data into Big Fish Network, a local database used by MWSRP with contributions from anyone in the Maldives. 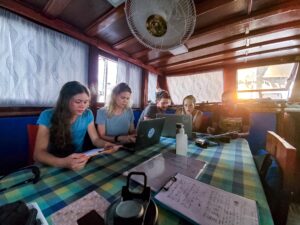 IT’S NOT ALL ABOUT WHALESHARKS!

Not every day was a typical survey day. There were a couple of days we ended the survey early to do a beach clean on the uninhabited picnic island of Ariadhoo. In total, we collected around 100kg (120lbs) of plastic to send to Parley to be turned into shoes and other items, along with multiple trash bags full of non-recyclable and non-reusable items.

On our day off, many of us opted to go scuba diving, with an early morning and afternoon dive around Dhigurah. One of my favorite activities was snorkeling with the nearby reef mantas, where we got to experience them up close after a briefing about proper encounter etiquette and were able to ID them thanks to Manta Trust’s database.

Of course, all good things must come to an end. The day before our flights, we left South Ari atoll early in the morning and traveled hours back to Hulhumalé, where we moored the boat and enjoyed a farewell dinner. We all left the boat at different times for our flights, boarding the dinghy to take us to dry land where we caught a ride to the airport. 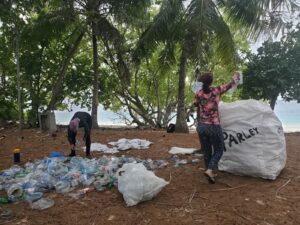 SO MUCH TO LEARN!

I feel so lucky to have been able to volunteer with MWSRP and learned so much from Bas and Chloe. I learned how to identify an individual whale shark, not only by taking photos but by recognizing their patterns. Fernando, for instance, had a ‘Y’ on his left and a 5 on his right, whereas Mendhan had a very distinct ‘W’ with a connecting squiggle on his left. I learned more about the SAMPA, how far it’s come as a marine protected area and how much further it has yet to go with the help of organizations like MWSRP. I learned that most of the whale sharks in this area are juvenile males, typically between 4 to 7m (12-25ft) long, and that they are believed to use this area for resting and thermoregulation after spending time in the deeper, cooler waters. I learned how to respectfully interact with a whale shark and signs to watch out for that signal its discomfort, such as its eye retracting into the socket or banking against a person. And I learned that even a large shark can look much smaller when it’s displaying “cute” behavior, such as being inquisitive. 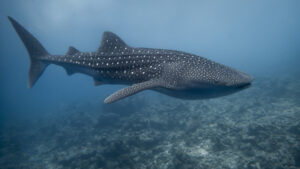 There are so many lessons I’ll take with me, but to leave a few with you if you ever get the chance to swim with these beautiful giants:

For more guidance on swimming with whale sharks and other interesting facts, follow Maldives Whale Shark Research on Instagram @maldiveswhalesharkresearch.

This was such an incredible and unforgettable experience and I’d like to thank all of the hard work Chloe, Bas, Clara and Kamey put into making this trip awesome and sharing their knowledge of the area and the creatures that reside within it! 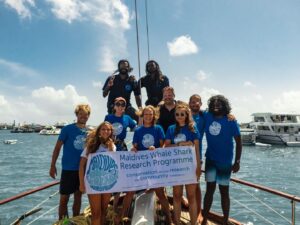 HOW TO VOLUNTEER WITH MWSRP

Volunteering with MWSRP is a life-changing experience. As you have read the programme offers you the opportunity to get hands-on with research and data collection, increase your knowledge on marine conservation, and have a great time doing it.

​You do not need to be a marine biologist! ​MWSRP welcome​s​ people of all ages, talents, and nationalities. ​The diverse skills that volunteers bring make a huge impact on the Programme.​ So if you love nature ​and marine life and you are not afraid of hard work​ get in touch!

Fill out and submit the volunteer application form here. See you in the water soon!