HOW CAN YOU REDUCE YOUR CARBON FOOTPRINT WHEN TRAVELING?

Before we begin on how to reduce carbon emissions while traveling, it is important to understand what carbon emissions are and how huge a problem excessive carbon emissions create. After all, misinformation and short term “feel good” actions can become a greater issue to the environment and cause disappointment when we don’t see the change we are expecting.

WHAT ARE CARBON EMISSIONS?

Carbon emissions are the release of carbon in the form of carbon dioxide gas which can through the respiration of humans and animals, as well as the combustion of fossil fuels used for generating electricity or by fuel powered vehicles. While at healthy levels carbon dioxide can directly impact maintaining life on earth by absorbing heat to regulate atmospheric temperature, increase of it can cause ice caps to melt, which leads to the rise of sea levels which in turn can submerge a huge percentage of the livable land, leading to loss of animal habitats and agricultural landscapes.
In relation to traveling, there won’t be a destination to travel to if continuous release of carbon emissions create this domino effect of damage to one habitat after another.

“Anthropogenic greenhouse gas emissions have increased since the pre-industrial era, driven largely by economic and population growth, and are now higher than ever. This has led to atmospheric concentrations of carbon dioxide, methane and nitrous oxide to unprecedented levels in at least the last 800,000 years. Their effects, together with those of other anthropogenic drivers, have been detected throughout the climate system and are extremely likely to have been the dominant cause of the observed warming since the mid-20th century.”

HOW CAN WE REDUCE CARBON EMISSIONS?

It is only through the lobbying of governments, large corporate organisations and industries where the greatest global impact in reducing carbon emissions will be made. However, we can all play our part in carbon reduction, remember the phrase used about plastic straws? ‘But it’s only 1 straw said 8 billion people’. The same can be said about reducing carbon. Making conscious positive changes in our daily life and in this case traveling, may only be a small ripple of change but if each of us reading this article makes that change, the ripple is greater.

An effective way to tackle any problem is to find out the root causes. In the case of reducing carbon emissions while traveling, looking into the main things we do while traveling is a good place to start. 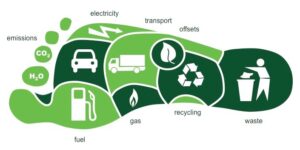 Traveling requires some sort of transport to get to your destination, ranging from diesel powered airplanes to bicycles and even horse ridden carriages. While having to use fuel burning transport is mostly unavoidable, especially if travelling overseas or long haul, there’s still smart choices to make with the transportation that emits carbon dioxide.

Book direct flights. As unappealing as a long journey can be, this can greatly impact reducing carbon emissions by using only one method of transportation to get to your destination.

Stay for a longer period when travelling long haul and in turn travel less frequently.

Choose the lesser carbon emitting transport where transit is unavoidable. A train instead of airplane, a ferry instead of a speedboat, a public bus instead of a private car.

Choose eco friendly transport. Biking, canoeing, horse riding are all modes of transport that do not burn fuels to get you to your destination and are also fun ways to travel!​

Of course a place to stay is a necessity no matter where we go. While traveling, even though we may feel like we have paid to use our accommodation in any way we wish, doing so will cause the same problems we try to avoid at home.

Wasting electricity, for an example. It is not just about the high electricity bill that we get to “avoid paying” when we leave on the lights or AC at another location. Using electricity still means that the companies that provide electricity are burning fossil fuels to do so which ultimately increases carbon dioxide in the air. So to prevent this and lessen your carbon emissions during your stay, simply treat your accommodation the same way you would treat your home.

Turn off any electric device that is not in use as opposed to leaving it on power save mode or on charge.

Turn off the lights, fan and AC when you leave the room.

Select accommodation wisely. By asking your accommodation provider if they have an environmental rating or a carbon emissions plan, you can help create the customer demand that will ensure the hospitality sector plays its role in improving environmental performance.

Choose eco-friendly accommodation. Smaller lodges and guesthouses which emit less carbon or even camping, which can effectively cut back carbon emissions apart from the actual campfire. Campfires do release carbon dioxide as well, however, as long there is a commitment to good campfire practices such as keeping the fire small, using dried fallen twigs on the ground or even using an eco-friendly alternative like a fire pot filled with fire gel, it is possible to reduce carbon emissions. –

While traveling, food becomes more than just sustenance. It is enjoyable to test thee gastronomy of other countries and seek out new tastes and flavors. As food is a part of our daily lives, the below points can extend to life outside of travel as well.

Choose locally grown food. This can be harder in some destinations than others. But wherever possible select menu items where the food has been sourced locally and not imported, which adds fuel miles to the overall carbon emission.

Choose plant based foods and eat less meat. The carbon emissions that are released by farming vehicles to maintain landscape can differ depending on whether the farm produces meat based foods or plant based foods. To produce food for 1 person for 1 year, it takes roughly 1 acre of land for farming animals but only 0.25 acres of land for plants. So it is easy to imagine that even if both types of farms required the same maintenance, a plant based one can cut back carbon emissions by ¾ of a meat based one. Not to mention that food consumed by animals can go to waste by energy for movement and manure but plants can be directly used for our consumption.

Don’t overfill your kettle. Only put as much water in the kettle as you need to reduce the amount of energy used.

Use an electric stove. It may sound contradictory to the above points listed under accommodation. However, manufacturers aim towards creating energy efficient equipment due to the increasing demand for environmentally friendly products. Further to that, electrical grids are turning towards renewable sources of energy which will help cut back on carbon emissions.

Refuse plastic packaging. We already know that single-use plastics are harmful for the environment, but it’s not just the pollution they create it is also the energy and fossil fuels involved in producing them.
With a deeper understanding of carbon emitting sources, they are easier to identify and thereby act on reducing it.
The actions listed above and more can be integrated into our every day life and will roll forwards into prospering the beautiful scenery and thriving wildlife that we wish to see during our travels.

We do not for one moment consider ourselves experts in this field. Like you we are learning. We found the following  really useful in our research for this article.

Saving the world is a job for everyone and by making several small changes to what you do you can cut your carbon footprint and help reduce the total impact of CO2 on our planet.

Travel on a Secret Paradise Tour and travel with the knowledge that you are reducing your carbon footprint. Contact us for more information.