Why Sharks are Important for the Maldives

On 23 March 2021, responding to questions from Members of the Parliament at the Economic Affairs Committee of the People’s Majlis, the Minister of Fisheries, Marine Research and Agriculture, Zaha Waheed stated that her ministry was considering the option to lift the 11-year-old shark fishery ban. Minister Zaha said that she sees “no reason not to” lift the ban in order to reap benefits from this economic resource.

In January 2021, Maldivian media reported the discovery of nearly half a tonne of shark fins prepared and packed for illegal export at the country’s main international airport. The consignment valued at MVR 2.6 million was confiscated by the Customs Services at the Velana International Airport, and the case is still under investigation. On 24 March 2021 the Maldives Ministry of Fisheries, Marine Resources and Agriculture released a statement which said that a black market for the illegal trade of shark fins was prevalent in the Maldives. While the statement assured that the January case will be investigated, we express great concern about the continuing delays and lack of transparency in handling the above cases in violation of marine protection laws of the Maldives.

Non-governmental organisations, environmentalists, divers, and other stakeholders who recognise what a devastating impact this could have on the Maldivian marine environment and businesses that rely on the health of the ocean environment are extremely concerned that this is being considered. 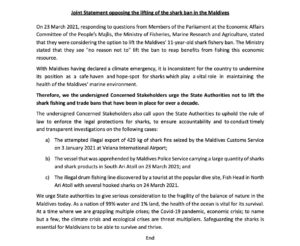 1.Sharks are essential for Maldives tourism

Sharks are extremely valuable for the Maldives tourism industry. Research on shark dive tourism in 2018 highlighted the important economic benefits of shark-diving tourism to the economy of the Maldives. Perceptions from the dive tourism sector of the Maldives showed that protected shark populations increased dive-trip demand by 15%, potentially resulting in an additional US$6 million for the Maldivian economy. Conversely, a negative perception of the Maldivian shark populations, a scenario likely to be perceived should the shark fishery re-open, decreased dive trip demand by up to 56%, resulting in a loss of more than US$24 million annually.

A report submitted to the Indian Ocean Tuna Commission (IOTC) by the Ministry of Fisheries and Agriculture in 2011 compared historical income from shark diving and fishing in the early 90s, when the Maldives shark fishery was at its height. Divers spent around US$2.3 million to watch sharks in contrast to $0.7 million generated from all shark product exports. It is highly likely that a re-opening of the shark fishery would not generate an amount similar to the 90s with the associated decline in shark and ray products globally, with an increased numbers of shark species under trade and fishery restrictions at Convention International Trade Endangered Species (CITES) and at IOTC.

The Covid-19 global pandemic has had devastating consequences to the Maldivian economy with the collapse of the travel and tourism sectors globally. The situation demands that the Maldives guards and sustains its ecosystem services that are essential for economic recovery in the present, medium and longer term.

2.There is no concrete evidence which proves that the Maldives’ shark populations have recovered since the ban was enforced

The available research does not confirm that the shark population in the Maldives have fully recovered and would not justify lifting the existing ban.

3. Sharks play a critical role in maintaining the health of the Maldives marine ecosystems

Sharks play a critical role in maintaining the health of the Maldives marine environment which is integral to the country’s economy and the well being of Maldivian people. Sharks are predatory species with large ecological function values that exert a powerful influence over lower levels and their elimination is known to have cascading effects on marine food chains and ecosystems. The integrity of the Maldives marine ecosystem would be compromised by reductions in the populations of these large predators.

Emerging research has also shown that the most important effects resulting from the loss of sharks in an ecosystem may actually be indirect and related to behavior rather than population structure. In other words, sharks may exert more of an influence on an ecosystem by causing organisms in that system to alter their behavior to avoid being eaten.

Sharks grow slowly, mature late, reproduce as infrequently as once every three years and produce few offspring, making them vulnerable to over exploitation. The life histories of sharks are more similar to those of large mammals than other fish. For example, dusky sharks, sperm whales, and brown bears each have gestation periods – the period from conception to birth – of more than a year. They also have few offspring, give birth to live young, and reproduce only once every few years. Female dusky sharks in the Atlantic Ocean do not mature until age 21, while female sperm whales and brown bears mature at about nine years.

In each of these instances, the animal’s life-history characteristics impact the entire population’s ability to grow. For example, a female shark that produced 10 pups every two years for 20 years would add only about 100 individuals to the population. In contrast, a female swordfish could theoretically contribute millions of offspring, and it is possible that thousands of these could survive if natural mortality from predators, disease, or starvation was low. 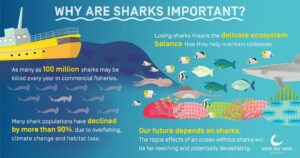 5. A national fishing ban on sharks is the most practical management option for the Maldives

In a country where management and enforcement of conservation measures are challenging, the feasibility of a “managed shark fishery” as indicated by Minister Zaha Waheed, is very low.
All fisheries management measures in Maldives to curb the decline of shark stocks following the introduction of long-lining in the 1960s were unsuccessful, including shark fishing in the vicinity of tuna schools (1981, 1992) protection of dive sites (1995), fishing ban around seamounts and Fish Aggregating Devices (1996,1997) and the tourism zones (1998). As a result, the total ban was introduced.

There exists few to no cost-efficient, reliable, widely adopted methods that allow for selective, exclusive fishing of certain shark species which means that lifting the shark fishing ban would increase the likelihood that the Maldives would be in breach of international commitments its party. The Maldives is a signatory to several internationally binding agreements including CITES, IOTC and the Convention of Migratory Species. Fishing of several species-oceanic white tip, whale shark and all thresher sharks- would need to be prohibited nationally in line with conventions’ obligations and that would need to be properly enforced if the sanctuary was to be lifted.

Globally, sharks are facing the largest crisis of their 420-million-year-old history. The global abundance of oceanic sharks and rays has declined by 71% since 1970 due to an 18-fold increase in fishing pressure. Three quarters of these species are now threatened with extinction. At least 100 million sharks are estimated to be killed annually, and the global trade of their fins which drives much of that catch is poorly regulated and deeply unsustainable.

7. The Maldives is facing a climate crisis

Maldivian people are deeply concerned about the crisis they face as a result global warming and associated climate change with acute alarm of an existential crisis to the Maldives. In February 2020, the Maldives joined other nations in declaring a national climate emergency.

The health and resilience of Maldivian marine ecosystems depends on the health of the shark population. Sharks are critical to the recovery of ecosystems from extreme climatic events. Research published this year shows how the loss of apex predators amplifies the climate change impacts on ecosystems (Nowicki et al, 2021).

A decade after the country’s shark fishing and trade ban, there is widespread concern from fisherfolk about the increased predication of their catches by sharks, and pressure is directed to the Ministry of Fisheries, Marine Resources and Agriculture by Members of the Parliament to lift the ban.

Fish are the natural prey of these apex predators so their predication levels are expected to increase as shark populations recover. By balancing the populations of fish in the food chain, sharks play a critical role in ensuring a constant supply of fish to sustain the livelihoods of fisherfolk and the fishery sector as a whole. 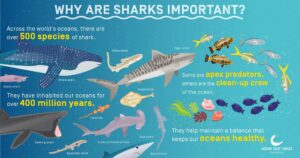 9. The Maldives should not participate in the illegal and destructive global trade of sharks

It is widely acknowledged that over fishing of sharks, primarily for their fins, is causing destruction to marine ecosystems at a global scale. It is the responsibility of countries to take control of their borders and prohibit the export of sharks, and in doing so stop supplying this market.

More than 70 million sharks are killed every year to cater to this trade. As a big ocean state, the Maldives has a moral obligation to stand up against this trade in recognition of the importance of sharks for all countries that are highly dependent ocean resources.

Managing shark fisheries and their trade for sustainability is incredibly expensive. Given that shark populations are already crashing and have not-recovered, already depleted populations, and would make no sense to the Maldives given the huge value sharks hold from a dive tourism perspective.

At this time of crisis, it is pertinent that we are solution driven and help the Government to make evidence-based decisions and sharing of knowledge which would thwart the concerns of others who are in favour of lifting the ban. Since the ban was implemented, there has been little to no data conducted since to evaluate:

1) Shark populations across the country;

2) The socio-economic impact of the ban on fishermen; and

This has led us to be in the situation we now face as concerned stakeholders. With this in mind,  we also call on you for support. If you or anyone you know is interested in supporting, funding or partnering with the Government to do shark research in the Maldives please contact the Ministry here: admin@fishagri.gov.mv.

UPDATE April 20 2021:
The Fisheries Ministry has confirmed in a public statement today that the Maldives will not lift the shark fishing ban, put in place a decade ago to protect sharks here in Maldivian waters

“The Maldives is proud to have always been exemplary in its efforts of ocean management…The Ministry recognizes the important role that sharks play in maintaining healthy ocean ecosystems and we assure the public that we remain committed to ensuring that our marine resources are utilised sustainably and managed responsibly.”
Thank you to everyone who has collaborated to highlight concerns and to those who have signed and shared petitions.